For some folks it is totally puzzling why people become vegetarians. To others it makes perfect sense. I know many different types of vegetarians and their stories and reasons for choosing this way of eating run the gamut.

I also know tons who take offense to giving up meat. Especially in the western world, meat has been a symbol of success and luxury since the second world war. In economically developing nations, consuming meat is one of the first actions people take to express themselves as no longer poverty stricken. Eating meat is so ingrained in society that depending on where you live you’d be hard-pressed to find anyone to empathise with giving it up.

Among the most popular reasons why people become vegetarian, leading a healthy lifestyle is often at the top of the list. Support for the ethical treatment of animals is another popular motivator and more recently people have been turning to vegetarianism as a way to work towards a healthier planet. Several eastern religions have long supported a plant-based diet to live their lives in a nonviolent way. Other reasons range from deeply political and philosophical to the plain psychological preference of not enjoying the taste or texture of meat.

Having grown up in the southern U.S. where hunting and meat eating are both stakeholders in sports and recreation, I was interested in a very straight forward and logical approach to the subject when I had to defend my choice to so many lifelong meat-eaters. While some never fully backed me up I’ve found that Mark Bittman’s short video lecture is one of the best tools I’ve come across yet for explaining why people become vegetarians.

If you have just 20 minutes, listen to what he has to say and more than likely you’ll find something in this video that makes sense to you. (Click the picture to watch.) 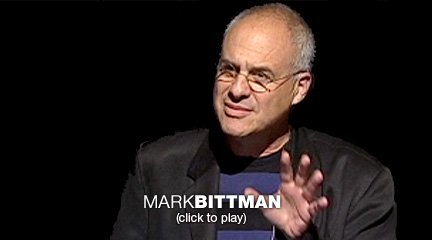 I know for some being a vegetarian is part of who they are, others are open to the lifestyle and can support the ideas behind it, and still others will never give up eating meat. I’m not asking you to. I think it’s helpful to find common ground or at least a sense of understanding when people who you care about make different lifestyle choices than you. Hopefully this video will help clarify why some people chose to eat this way and if it's convinced you I hope you find some recipes on this site that satisfy your palette even if you don’t give up meat altogether! Enjoy!