Happy Valentine's Day! This is our 8th Valentine's Day as a couple but our first as an engaged couple! We got engaged on a beautiful snowy hike during Thanksgiving time last year!

Since there's no better time to get all sappy on you, let me rewind a bit :)

Nearly ten years ago I fell in love-at-first-site with my now fiancé Evan. We lived in different states, met briefly one weekend and immediately thereafter began a deep friendship. We spent entire nights on the phone, killing multiple phone batteries, sending novel length emails daily and quickly discovering we were made for each other. Aside from the fact that I was 15 and in high school and he was 17 heading to college in yet another different state, everything was perfect. I literally wrote in my journal the night I met him "I know this sounds silly but I'm going to marry Evan someday!".

Of course not everyone was so convinced of our eternal love ;). It was easy to write it off as puppy love, but I'd like to think something in me just knew.

Though we had an immediate connection, we didn't start dating until 2 years later. We kept getting to know one another during that time and we were both in the right place to commit the summer before I was heading to college...on the other side of the country. Literally. I was in California and he was in Pennsylvania. I'm happy to say we made it through 4 years of long-distance! It definitely wasn't easy, my heart has never physically hurt so much, but it was actually a really positive and formative experience for several reasons.

It made us ask ourselves if it was worth it early on (fortunately we both decided it was!). It allowed us to develop those ever-useful communication skills. We HAD to talk everything out. There was no body language to rely on, and I am definitely grateful we built such a strong foundation that way.

It also allowed us to grow together and develop ourselves as individuals at the same time. I am very appreciative for all of those things - and knowing there was an end in sight (even if it was 4 years away) kept us going. I don't miss sleeping with Skype open all night or flying 8 hours just to see each other though!

After I graduated we got to pick our first home together. We chose Austin, TX and spent 3 amazingly lovely years there! Moving in together was a breeze. Getting to see each other everyday is a true gift. At the end of our third year in Austin we decided to take a couple months off from our jobs to travel around Asia (India, Thailand, Cambodia and Japan) before moving to Seattle. 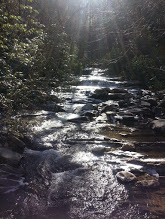 So the plan was that I would leave my job in late November, we would spend the holidays with our families and leave for Asia in the new year. For the past several years as a way to split holiday time between families, we do early Thanksgiving with my folks and actual Thanksgiving with his. Since my last name is Frank this celebration has been dubbed Franksgiving, haha.

We flew up to Tennessee for Franskgiving where we would be celebrating with my family and my best friend, Kasey, in a cozy cabin in the Smoky Mountains. The morning after arriving at the cabin we all woke up to go for a hike. It was a really snowy/icy trail but there was supposed to be a glorious panoramic view from the mountain top at the summit (this was all part of his plan!). I say supposedly because we didn't make it to the top! It was really slippery and icy, there were no rails and the drop-offs were steep! 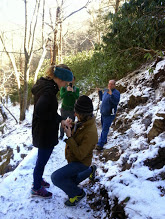 About half-way up the mountain, we all unanimously decided to turn around, but before heading back down, Evan and my parents kind of awkwardly lingered and then all in a flash my parents both pulled out their cameras and Evan was on his knee. "We've spent 7 years together and I want to spend the rest of my life with you. Will you marry me?" Of course I said YES! It seemed to happen in a blur but it was beautiful and perfect and I'm happy we got to share that moment with some of the special people in our life.

The way down the mountain seemed a lot faster and easier than the hike up, but then maybe I was just floating on a cloud. :) I'm so thankful and excited I get to live my life with one of the most genuinely kind and handsome humans on the planet. (I admit I'm pretty biased.)

So that's our engagement story in a nutshell! Lots of happy toasts, cheers and eating of delicious plant-based Thanksgiving food ensued. My Dad also shared something he's never told us before over some champagne later that day. Apparently the weekend we all met - way back 10 years ago - as my parents were falling asleep, my Dad told my Mom he wished I could end up with someone like Evan someday. Probably the same time I wrote that fateful diary entry! Turns out I did end up with "someone like Evan". Someone very much like Evan indeed. :)

Well I want to apologize for all the sappiness but who doesn't love a good love story? From the bottom of my heart I wish you all a very happy Valentine's Day!