I can't even tell you how infrequently I eat pasta. Don't know why, I'm just not a big pasta person. So much so that one of my old roommates says that she is still out of the habit of eating pasta because we never made it when we lived together. 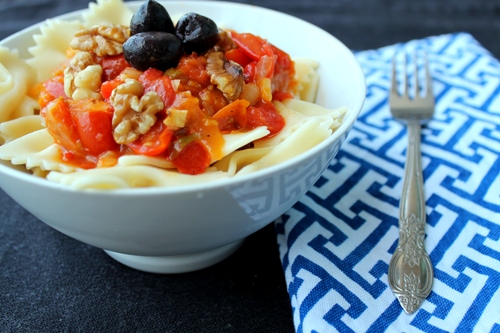 I have to say this is much to the chagrin of my current roommate too, my boyfriend. This fellow, well he could probably up and run a marathon tomorrow without training because that's just the body type is. He could live on carbs. In fact as I'm writing this, he's eating the meal pictured above and just exclaimed, "I LIKE PASTA!"

But every once in a while, maybe a couple times a year, I do pasta. And when I do pasta I do it right, meaning I make my own sauce, I make garlic bread, wine, the whole nine yards. (Well, the whole eight yards because I've never actually made my own pasta, but I will one of these days...)

This vegetarian pasta recipe has the classics: tomatoes, basil, garlic but also some unexpected pops of flavor like black olives and walnuts. (These are add-ons though so if you don't jive with them feel free to leave them off.) Walnuts add in a little omega-3 action not often found in a vegetarian pasta recipe and I also throw in some broccoli, you know, when I need to get that green in. But not always. Sometimes it's purely indulgent homemade pasta sauce goodness.

So if you're normal and not me, you probably eat pasta more than twice a year. If you're used to just heating up a jar of sauce and boiling your noodles, give this vegetarian pasta recipe a whirl. It's refreshing in its simplicity and oh-so-comforting.