What I Learned from My Cooking Class in India

And Other Reflections on Indian Food Culture 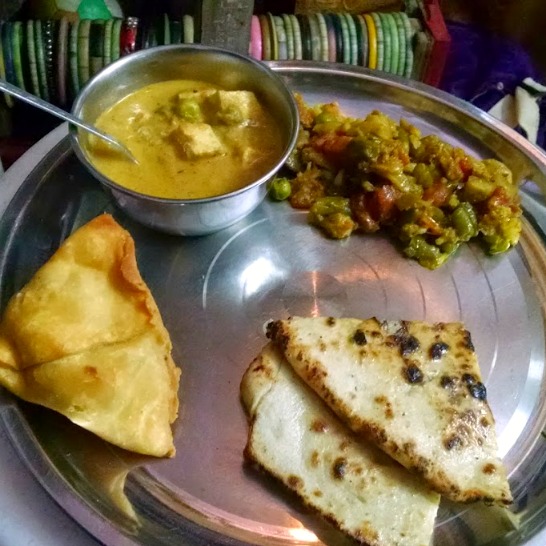 Indian food is magical to me. I mean these folks have been making delicious, interesting, rich vegetarian food for centuries and if you're anything like me, attempting to recreate it at home didn't always turn out as hoped.

It's one of the first cuisines I was really keen to learn, and here I am 10 years later, still trying to figure out the secrets. To me Indian food can be intimidating, hard to get right and time consuming.

Especially since I've asked multiple friends of mine who are Indian for pointers or recipes and they all have the "little bit of this, little bit of that" model for spicing, i.e. not the easiest thing to replicate. ;) 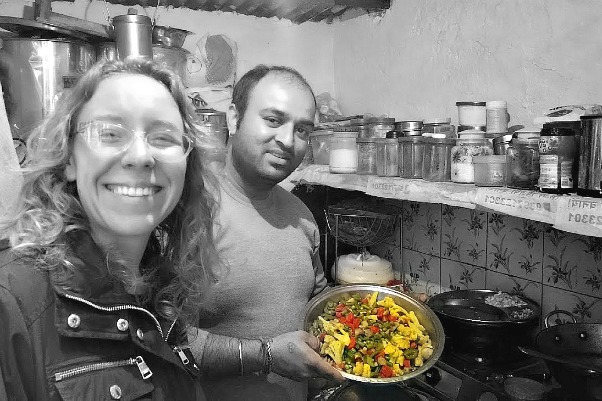 So, all that to say that when Evan and I went on our grand Asian adventure, and decided to start our journey in India, an authentic cooking lesson was high on my must-do list.

We had a great experience in an almost full-day class, which was just our teacher and the two of us in his family's home, in his real kitchen finally learning the secrets to successful Indian cooking. Here's my recap!

*Note: We took our class in Northern India where the food was heavily influenced by the Mughlai people. From what I understand, there are many regional differences in Indian food. That being said, the large majority of Indian restaurants in North America serve Northern Indian food.

Also, what's written below reflects what we learned from our experience. I'm sure there are a million and one different ways to do things and any observations had were specific to our wonderful cooking instructor and his welcoming, humble abode.

1. Home cooking is the norm

Man, I was so impressed by how many people cook and eat homemade meals! Sometimes it seems like a near novelty to make something from scratch in the U.S. but it's humbling to see this is a multiple-time-a-day occurrence for many Indian families.

I love the pride too! Everyone either thought they were the best cook or their mom/wife/sister was :D I also heard that even for busy business employees who don't have time to make their own food, instead of going to a restaurant for lunch, there is a whole network of people who make homemade food and deliver it to offices. So cool! 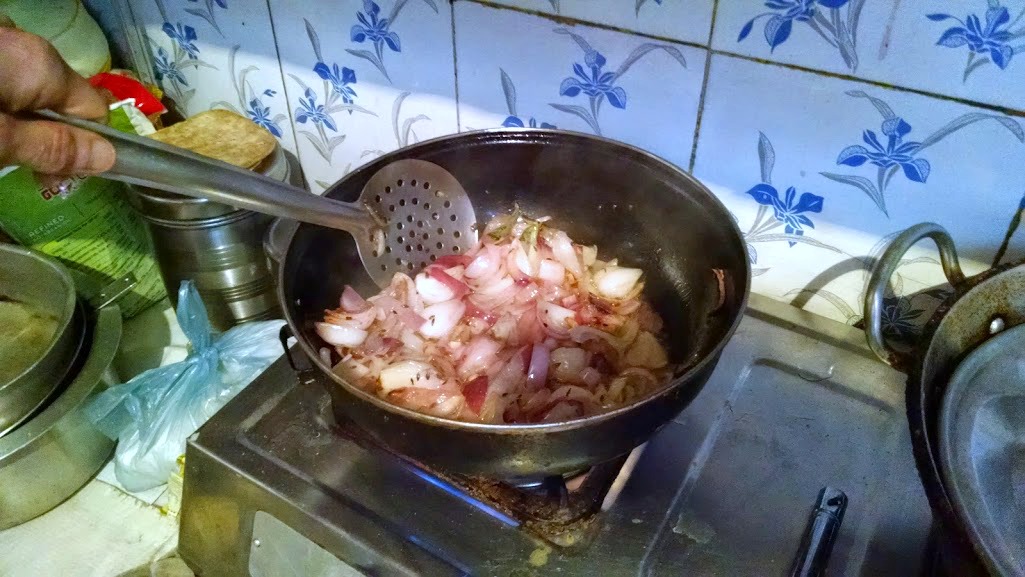 While cooking from home normally means it's a bit healthier than eating out, the amount of oil our cooking instructor used was downright sinful.

I don't think I've ever used even half that much oil in one dish before (though I'm certain I've eaten it at restaurants!). He told us it was a cup but I think it was at least two.

I guess that's one way to ensure a rich taste. I can't wait to try out the recipes we learned only with a fraction of the oil - hopefully it still tastes good with less. :) 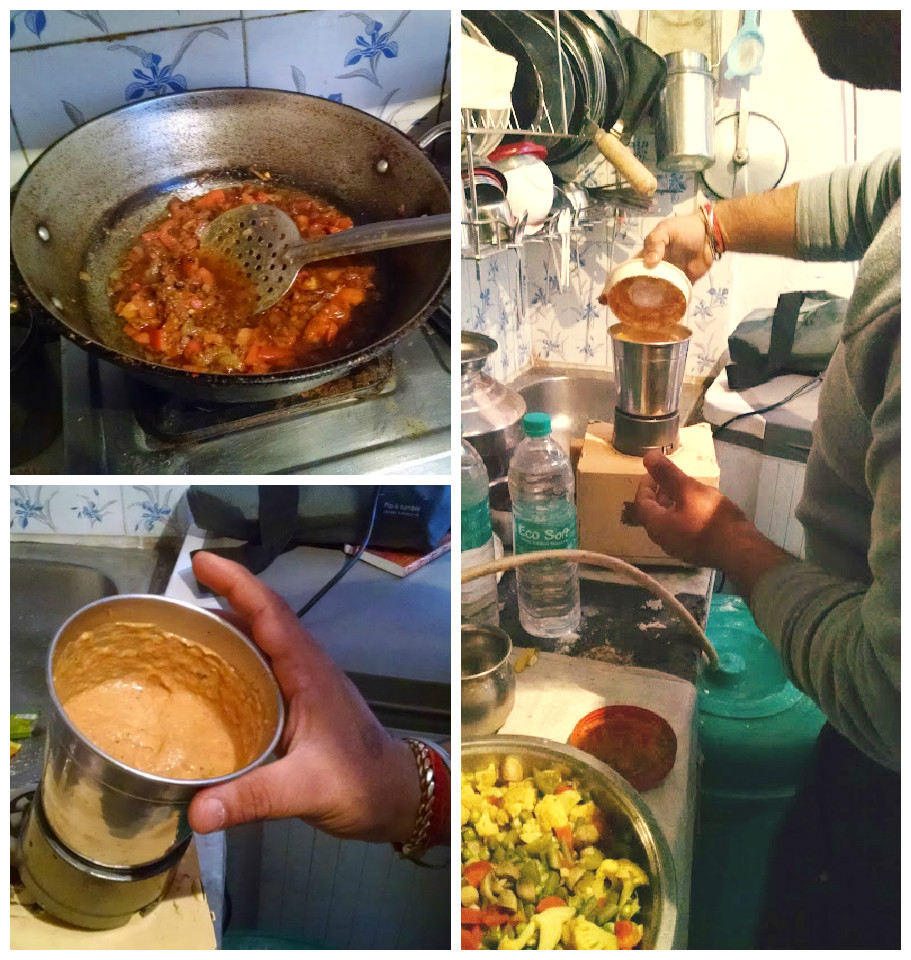 3. No cream required for creamy gravy

This is my favorite tip I learned during our class and one I will surely be applying at home. Our instructor taught us that for a creamy gravy that doesn't have cream, puree sautéed veggies and onions to make a thick sauce.

We started off by cooking up some onions, tomatoes, garlic and spices, you know...the basics, then once those were to his liking, he plopped them in a small blender and pureed them all together and put the now sauce back in the wok to finish out the curry.

Awesome! I can make a luscious, saucey curry all from a veggie base - now that's what I wanted to hear!

4. You don't need a tandoor oven

Prior to going to Indian I heard stories of the tandoor, which is supposed to be a wood/charcoal burning, cylindrical, clay oven in which flat breads and meats are cooked.

They always seems so exotic and maybe a little daunting, not to mention out of the question for practical purposes. I thought naan had to be made this way.

That's why I was pleasantly surprised when our guru made the bread dough and started cooking the naan right on his burner. Genius.

He had a gas flame stove top and even though he assured us it could be made atop an electric stove just as well, we'll have to see how that turns out. I'll report back. 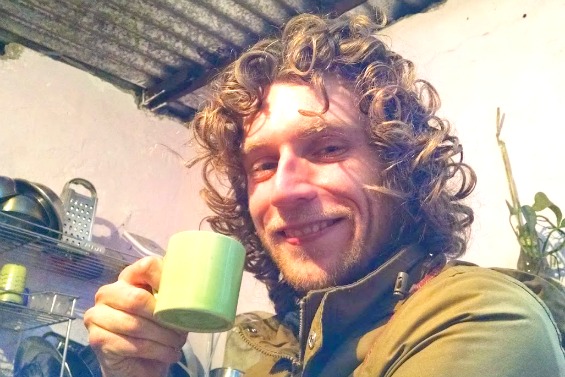 5. Garam Masala: More to it than the U.S. blend

When looking up garam masala mixtures in the past, or buying the pre-mixed spice blend from the store, it usually was composed of cardamom, black pepper and cinnamon. Maybe a pinch of cloves.

Well well well, the blend used by actual Indians has so much more to it! The list our teacher gave me had black pepper, coriander seeds, cumin seeds, mango powder, bay leaves, nutmeg, cloves, black cardamom, dried ginger and cinnamon.

Of course no quantities or proportions were given ;) but now I know why my dishes often lacked dimension.

6. Most of my favorite curries have the same base

Maybe this isn't that surprising but most of the Indian curries I like best have something in common. By which I mean to say they are the same curry with different veggies mixed in, hah.

If you like those unctuous tomatoey dishes where some come with mushrooms and peas, some come with carrots and green beans, some with potatoes and cauliflower, you'll be happy to know you just have to know how to make one sauce and then throw whatever you want in.

And if you aren't vegan add a bit of milk and paneer cubes and bam, even more options. All one great dish. It made me a little disappointed by the lack of range in my Indian palette but also quite pleased I only have to work on mastering one thing, lol. 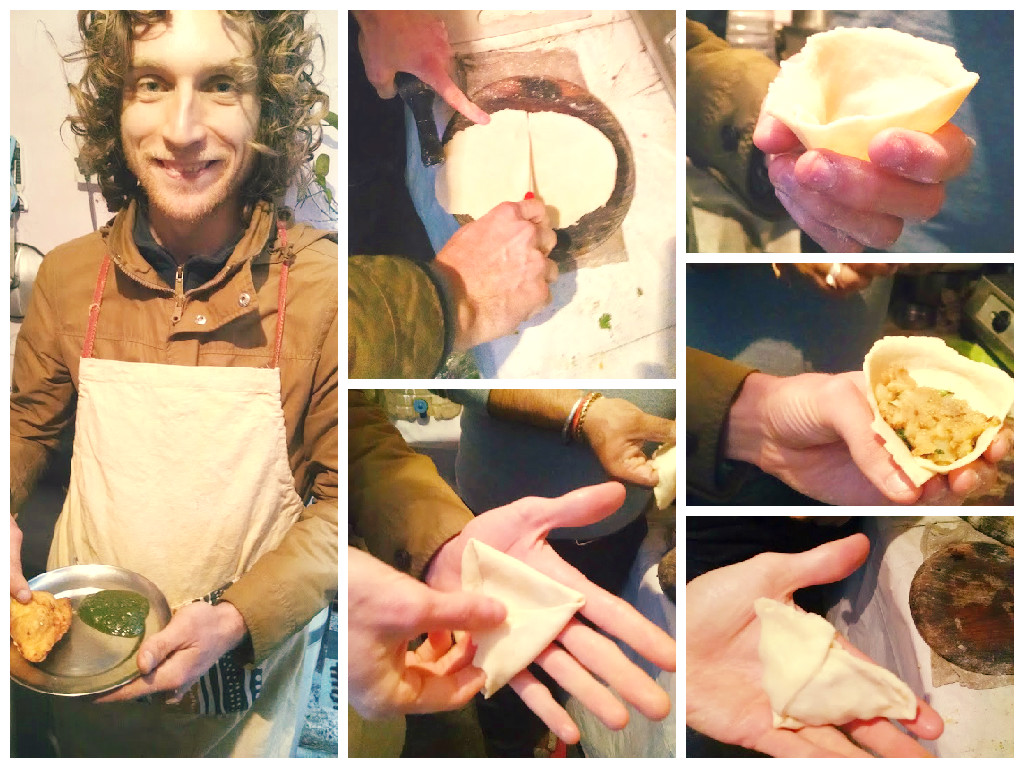 Funny story: Evan an I were trading off, one of us would jot down recipes and advice in our notebook and take pictures while the other would be hands on prepping and cooking.

Because we kept going back and forth handling our phones and paper and then the raw vegetables, we kept using our hand sanitizer in between.

After several rounds of this dance our teacher stopped us and said "You're going to ruin the food. You can't be too clean or the food won't have flavor. Too clean and it won't taste good." Hah.

Duly noted. We stopped being such OCD westerners after that but I am glad everything was cooked with high heat.

One night in Delhi we went out to dinner with a friend of ours who was born and raised there.

Well let me rephrase that, we met at 6:30, Evan and I were starving for dinner (we are such old fogies) and when we found our friend he wanted to walk around for an hour because it was way too early to eat.

Eventually he gave in and we started picking his brain on the time table most people ate dinner. He said "Oh anywhere from 7:30 to 10ish". 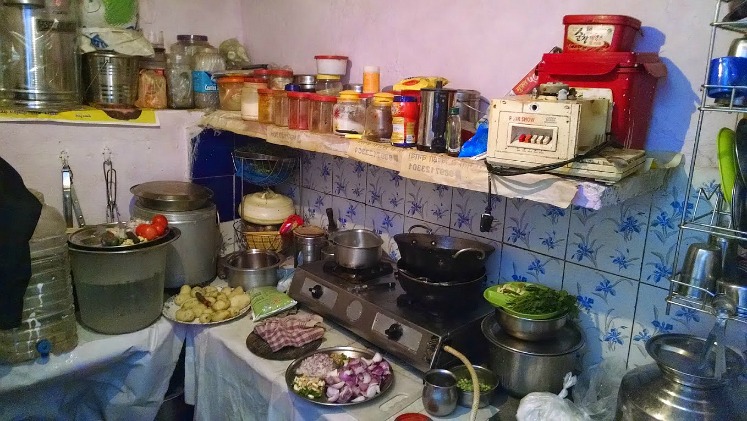 9. Kitchen resourcefulness to the max

I saved this one for last because it was arguably the biggest difference between how I cook when I'm at home and how we did it in our cooking class. It doesn't have to do with the ingredients but the kitchen.

The space was tiny, maybe the size of a laundry room in a middle-class home in the U.S. It had a faucet-less sink and a tap near the floor with a bucket. The pot of milk was left out on the counter.

Our food prep area was the top of a washing machine next to their pet bird's cage, next to a laundry line with clothes drying all underneath an open roof where rain could come in. Our teacher used plates of chopped veggies as a flat surface to hold other plates of prepped spices.

There was no oven, no microwave. The fridge was in the other room. Even though going in I didn't know how all three of us would work in there making food for hours, somehow it all worked. I respected it. 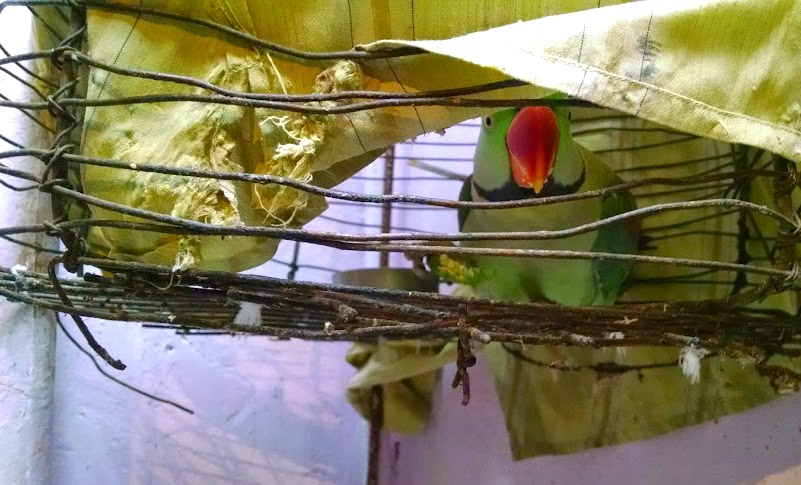 It was a humbling reminder of how little we actually need to get by. And not only get by but thrive and make delicious, mouth-watering goodies. While it never would pass a food safety inspection in the U.S. it made me appreciate how many different ways there are to do something, and think maybe that's not as important as we make it out to be (see #7).

It made me laugh at times back home when I felt like I didn't have "the right" utensil/pot/dish etc. to get the job done. It also made me appreciate everything I do have.

Spending several hours in our instructor's kitchen provided me with every emotion I always hoped to feel by traveling: how important it is to keep an open mind, simultaneously impressed and intrigued by a different way of life, appreciative and grateful, and a sense that none of it really matters, that at he end of the day we're all similar.

And that's why I love food, like a smile it is timeless and spans cultures, ages and genders to unite us all.