This Asian chop salad idea sprouted one Sunday afternoon when I had an abundance of cucumber left over from the week and wanted to use it as the main substance of a salad. 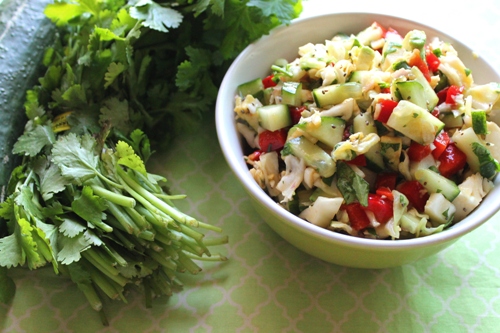 Cucumbers had been on sale at the store that week and I had already sliced them to dip in hummus, added them to smoothies and layered them on sandwiches. It was now time for Mr. Cucumber to be the star of the show.

Honestly, this Asian chop salad was the perfect use for it. The dressing has plenty of tang and flavor, the fresh cilantro gives it a nice herby-spring like kick and the cucumber is the perfect amount of crunch with its mellower refreshing taste.

If you’ve never had a chop salad before this is a delectable starting point. Call me weird but I’ve always had a thing about the way my vegetables are cut. Some people have texture issues, refusing to eat pudding, some people are particularly sensitive to one thing or another. Well I never really was the picky sort but to me, if you’re making a stir fry your carrots should be cut into matchsticks. If you’re making a soup they should be diced. So naturally a chop salad is a novel and fun way to eat veggies and in my mind it’s totally different than my normal salads. :)

I really like combining flavors and ingredients in new ways and for some reason, I often forget about this flavor combo. I don’t know why...it’s really delicious. So if you have some veggies that you didn’t know what to do with chop ‘em up and toss ‘em in. This recipe is wonderfully adaptable and makes a super tasty lunch on a lazy weekend afternoon!